I have four main areas of research, as follows:

CHANCE: Understanding compound flooding in the past, present and future for North Atlantic coastlines (2019-22, NERC, PI): 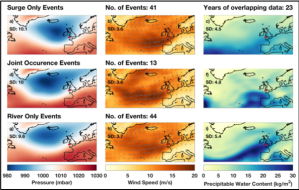 Floods can arise through the joint occurrence of factors such as (1) storm surges plus astronomical tides  and/or (2) local or remotely (swell) generated waves; but also from heavy precipitation, either through (3) increased river discharge (fluvial) and/or (4) direct runoff (pluvial). Most flood risk assessments to date have considered these four main drivers of flooding separately. However, the adverse consequences of a flood in coastal regions can be greatly exacerbated when the oceanographic (storm-tides and waves), fluvial, and/or pluvial sources of flooding occur concurrently or in close succession, a condition known as ‘compound flooding’. In CHANCE we will deliver a new integrated approach, incorporating all the spatial and temporal dependencies between the four main source drivers of flooding in coastal regions. This will allow us to make a step change in our understanding and prediction of the source mechanisms driving compound flood events in coastal areas around the North Atlantic basin.

CompFlood: Compound Flooding in Coastal Viet Nam (2019-22, NERC, PI): This project will bring together UK and Vietnamese expertise to map and characterise present and predict future flood risk, from coastal, fluvial, and surface sources and, uniquely, to assess the risk of compound flooding across the Mekong delta. Exposed to heavy monsoon rains that can cause both

fluvial and pluvial flooding, and tropical cyclones that cause coastal flooding, the Mekong is one of the three most vulnerable deltas in the world. Our hypothesis is that previous flood assessments have underestimated the source drivers and hence the likelihood of flooding and associated risk, as compound events have not previously been considered. We will assess the large-scale drivers of variability in storms and monsoon rainfall that impact Viet Nam and develop novel (for both the past/present and future) meteorological datasets needed to drive the coupled flood models of the Mekong delta and its catchment. This involves use of next-generation climate models, which can simulate both intense monsoon events and tropical cyclones, providing datasets that are sufficiently large for our statistical analysis of flood risk.

CoastRes: Coastal resilience in the face of sea-level rise: making the most of natural systems (2019-20, NERC, co-I; overall PI Robert Nicholls, Southampton): Sea-level rise is one of the most profound 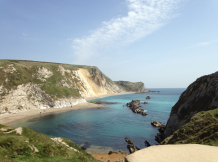 aspects of human-induced climate change and its steady but uncertain rate of rise will transform the world’s coasts in the coming decades. While this is understood in a technical sense, wider society has not grasped the scale of change produced by expected rise in sea level over the next century. In the UK, with its large legacy of coastal defences, this issue is especially challenging. Many defences are uneconomic to maintain and renew, and widespread ‘realignment’ is planned within the strategic process of Shoreline Management Planning.  There has been surprisingly little consideration of how the transition to a realigned coast can be facilitated and enabled across the full range of physical and social perspectives. CoastalRes aims to develop and demonstrate prototype methods to assess realistic pathways for strategic coastal erosion and flood resilience in the light of climate change, including sea-level rise.

long-term ice sheet melt, the RISeR project will focus on the Last Interglacial (125,000 years ago) when global temperatures were ~1oC warmer than pre-industrial values and 3-5oC warmer at the poles (a pattern similar to that predicted in the coming centuries), and global sea level was 6-9 m higher, far above that experienced in human memory. By collecting Last Interglacial sediments preserved offshore in the North Sea, this project will use innovative methods to reconstruct the rates of sea-level change experienced in the region during this climatically warm period; allowing RISeR to ‘fingerprint’ the source of ice sheet melt. RISeR will use this information to provide high-end projections of sea-level rise beyond 2100 for northwest Europe, based upon the reconstructed magnitudes and rates of regional Last Interglacial sea-level change. Read more here…

ACROSS: Australasian Colonization Research: Origins of Seafaring to Sahul (2019-24, European Union, co-I; PI Helen Farr, Southampton): One of the most exciting and enduring

research questions within Archaeology is that of the peopling of the planet and the movement of Anatomically Modern Humans (AMH) Out of Africa. The colonization of Sahul (modern day Australasia) by at least 65,000 years ago, represents some of the earliest evidence of modern human colonization outside Africa, yet, even at the greatest sea-level lowstand, this migration would have involved seafaring. It is the maritime nature of this dispersal that makes it so important to questions of technological, cognitive and social human development. These issues have traditionally been the preserve of archaeologists, but the ACROSS project takes a multidisciplinary approach that embraces marine geoarchaeology, oceanography, and archaeogenetics, to examine the When, Where, Who and How of the earliest ocean crossings in world history. Read more here…

E-Rise (2017-18, NERC, PI): Detecting accelerations in the rate of sea-level rise is not straightforward, due to

the considerable inter-annualvariability evident in sea level at regional/local scales.  However, these forecasts are important for long-term planning for coastal infrastructure. This project is exploring the feasibility of combining in situ and satellite-based data with statistical models to develop a toolbox which will help identify timings (with uncertainties) of sea-level rise rates and, accordingly, to estimate lead times. Read more here…

This project has synthesised a number of “black swan” storm surges – events that have not been observed but that are physically plausible. We did this by analysing and grouping European storm systems from reanalysis data, and then perturbing the atmospheric systems using a well tried and tested forecasting tool (made available to us by the Met Office). The modified wind and pressure fields were used to drive coupled storm surge and wave models to create the plausible worst cases. Read more…..

1.5°C, in which the emissions pathway was not fixed at the outset, but instead responds to our evolving knowledge of the warming response to emission to deliver a warming target of 1.5°C over the 21st century and beyond. The project then examined the feasibility of the net carbon emissions and assess the changes for ocean pH and global mean and extreme sea-level rise and their associated societal impacts and implications following an Adjustable Pathway to 1.5 °C warming compared to Adjustable Pathways to 2.0 °C and 2.4 °C warming. Read more…..

iGlass (2012-2015, NERC, PI):  Existing sea-level rise projections do not account for the longer-term changes in

global land-based ice volume. Although
this ice-sheet contribution to sea-level change develops over decades to centuries, its long-term impact is large and virtually irreversible. It therefore dominates the uncertainty in future sea-level projections. Read more…..