If we act now and cut carbon emissions, we will save up to 40 cm of sea level rise by 2100, but up to 3.5 m by 2300. That is the conclusion of our new study which developed a new approach to predicting future changes in temperature and sea level rise over the next three centuries. It’s not easy to think 300 hundred years ahead. And yet we must remember our actions today, will impact our great, great, great, great, ….., great grandchildren.

The 2015 Paris Agreement to strengthen the global response to the threat of climate change committed the 175 countries that ratified the treaty to aim to hold ‘the increase in the global average temperature to well below 2°C above pre-industrial levels and to pursue efforts to limit the temperature increase to 1.5°C above pre-industrial levels recognizing that this would significantly reduce the risks and impacts of climate change’. However, while reducing human emissions of greenhouse gases will stabilise temperature, it is often forgotten that sea-level rise will continue for many centuries irrespectively. This is because it takes many hundreds of years for the cryosphere (the area of our planet covered by ice) and the deepest parts of the ocean to adjust to increased air temperatures. This brings long-term challenges to those living in the coastal zone. These challenges may be immense unless we take action today to mitigate for climate change and where possible, appropriately adapt.

Most projections of climate change stop at the year 2100, for two good reasons: (1) it is hard to think and plan beyond this time-frame; and (2) global climate models are computationally expensive to run. To make it easier to investigate changes in temperature and sea-level rise beyond 2100 we developed a simple but clever global climate model that we call WASP. This stands for the Warming Acidification and Sea-level Projector. It represents the whole earth using 8 boxes (Figure 1) that capture the interaction between the atmosphere, vegetation, soil and the different layers of the ocean. Using WASP, we can accurately predict future changes in climate, for different carbon emissions, on a global scale. Because of the simple way we represent the earth, we can relatively quickly run the model out to the year 2300, many millions of times; something that is simply not possible using regular climate models. WASP is so efficient that you can run it on a smart phone in seconds (give it a go – click here). 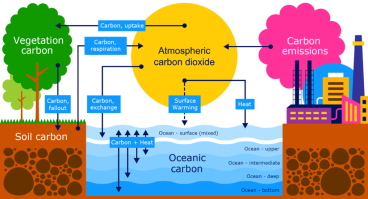 To avoid the most dangerous consequences of anthropogenic climate change, the Paris Agreement provides a clear and agreed target of stabilizing global surface temperatures to under 2.0 °C and preferably closer to 1.5 °C. However, policy makers do not currently know exactly what carbon emissions pathways to follow to stabilize warming below these agreed targets, because there is large uncertainty in future temperature rise for any given pathway. This large uncertainty makes it difficult for a cautious policy maker to avoid either: (1) allowing warming to exceed the agreed target; or (2) cutting global emissions more than is required to satisfy the agreed target, and their associated societal costs. We therefore, develop a new approach to restrict future warming to policy-driven targets. These uses what we call ‘Adjusting Mitigation Pathways’, in which future emissions reductions are not fully determined now but respond to future surface warming each decade in a self-adjusting manner.

How will this impact people?

We have investigated the impact this has on the area of land that would be inundated by the year 2300 and the number of people that will likely be exposed, in another study. We estimate that if we restricted warming to 1.5°C, 1.5% of the global population will be exposed to sea-level rise by 2300. In contrast, for the high emission scenario, more than 5% of people on the earth will be exposed to coastal flooding. If flood defences are not taken into account, the area of land that may be inundated due to sea-level rise in 2300 will almost double for the aggressive mitigation and the non-mitigation scenario, respectively.

We find in another study that many highly populated low-lying delta areas could be totally flooded unless adaptation is considered and sediments are allowed to settle on adjacent land during times when rivers flood. However, adaptation has to be undertaken wisely, as decisions we make today may have long-term consequences. For example, many of the millions of people living in delta regions world-wide rely on regulated water supply or electricity via dams up-river. Dams not only control water, but also hold-back sediment from moving downstream. When rivers periodically flood, it means there is less sediment to deposit on the adjacent land. In coastal regions, this potentially means that the land will subside relative to the river and become more flood prone. Further defences, such as dikes may be required, but this exacerbates the problem. Without sedimentation, deltas areas are at high risk from sea-level rise. Subsequently deltas and other vulnerable coastal regions need to look to the future and consider plausible long-term international strategies protect millions of people against flood risk. This will not be easy as national and international collaboration may is needed, so that adaptation to sea-level rise is integrated into existing policies and development.

Sea-level rise poses an international threat, not just to coastal communities, but those inland who rely on the coast for livelihoods. Mitigating for climate change will reduce the rate of sea-level rise, but it will continue to rise for centuries. This is inevitable and must be something we plan for.